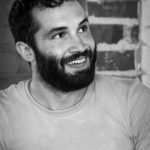 Kodi Thompson is a ceramic and mix media artist residing in St. Petersburg Florida. In 2018 he received his MFA degree in studio arts with a concentration in ceramics from Southern Illinois University Edwardsville. He received his BFA and art history minor from Edinboro University of Pennsylvania in 2014. From 2014 to 2015 Kodi was an Artist-in-Residence at The Morean Center for Clay. He has been acknowledged in multiple publications such as Southern Illinois University’s Research and Creative Activities, and the NCECA National Student Juried Exhibition Catalog during both his undergraduate and graduate career. He has received grants and awards for his research and works. Some include the RGGS Grant, the Visualizing Research Impacts Competition Award, and the Creative Pinellas Emerging Artist Grant. He has shown in galleries and museums such as The Nu Contemporary Gallery, The Erie Art Museum, and Pittsburgh Center for the Arts. Others include The Clay Studio of Philadelphia and the Morean Arts Center. Kodi currently holds the position of manager at the Morean Center for Clay in St. Petersburg Florida, and is continuously exploring his ideas in clay in his garage studio.

A common goal of graffiti writers is to create a personal and unique style of writing different from the others. This usually results in the creation of a personal alphabet (A-Z) and set of numbers (0-9) influenced by the styles and techniques created by past writers. I’ve drawn upon my own history to create a set of shapes that reference a personal alphabet, but one that is non-representational of existing letters or numbers.

Previous two-dimensional surface designs influenced from skateboarding, graffiti, architecture, and other experiences have been cropped into abstracted shapes. The shapes were plasma cut out of steel and became dies which clay could then be forced through. Totaling 36 in all, the dies are a symbolic personal alphabet rooted in my past. Clay is forced through these shapes, resulting in geometric columns that can be cut, altered, and reconnected.

These “drawings in space” become a language of my own, but one that can be interpreted by whoever is “reading.” Dirty brick-colored clay makes the forms take on an architectural appearance, but they can also take on the look of other materials or objects, both ancient and modern. They can suggest time and motion, success and failure. They can propose risk and adventure, or relationships (good and bad). The ambiguous and cryptic nature of the work invites viewers to decode this for themselves. References to my past are disguised in plain view from the extruding process, becoming a completely new and infinite set of forms to be interpreted.